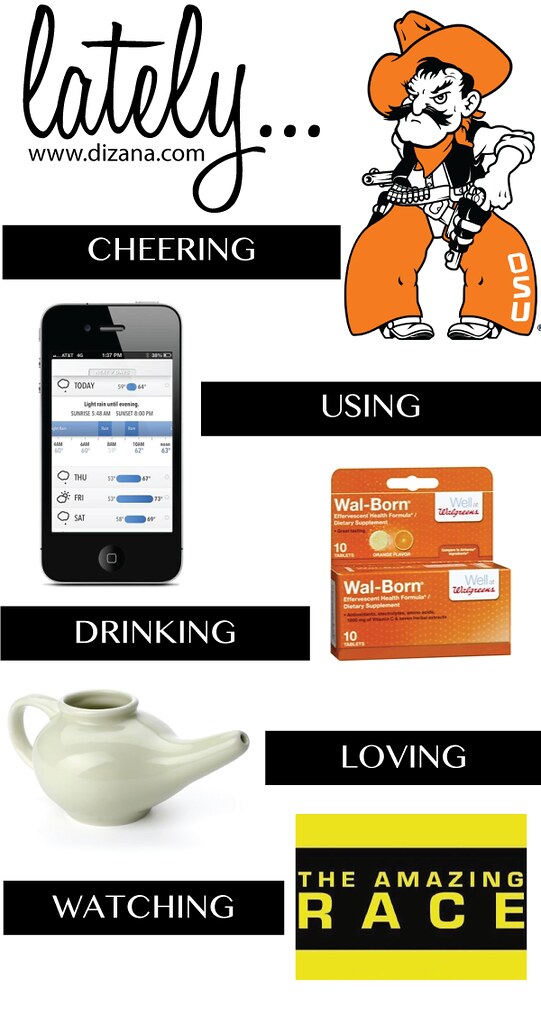 How was your weekend? I spent some time with my Mom; got to see my niece play basketball; and came down with a nasty cold.

Cheering for… the Cowboys. My Chiefs lost the State Championship game but my Cowboys managed to pull out a win over the Sooners in the Bedlam game on Saturday! Both state teams have had pretty lousy seasons. At least one of them had to win Saturday; glad it was the Cowboys.

Using… Forecast.io. The data for the weather app on my iPhone has been less than accurate lately. After several days of a 10-20 degree difference, I began using Forecast.io on a regular basis. It’s an aggregate of multiple weather sources which hopefully provides a more accurate forecast.

Drinking… Wal-Born. When I felt this cold coming on Saturday, I dropped by Walgreens to get some Airborne. The store brand, Wal-Born, was priced much better so I decided to give it a go. I usually get the lemon-lime Airborne but didn’t pay any attention to the flavor when I bought it. I bought the orange which is tolerable, but not as good as the lemon-lime.

. Anyone who knows me, has probably heard me talk about my love for Amazon and my love for the neti pot. I should get a commission for converting people to both. I don’t get a lot of neti pot converts because people are too afraid to try it. I promise if you try it, you’ll be a fan. It’s definitely helping me get through this latest cold with less discomfort.

Watching… The Amazing Race. I used to be a HUGE Amazing Race fan. The last few seasons really turned me off of the show. It seemed like when they were casting, they went out of their way to pick the most obnoxious people on the planet. I decided to give it a try again this season and have been enjoying it. I’m not a fan of the Wrestlers but overall, I’ve been enjoying it.