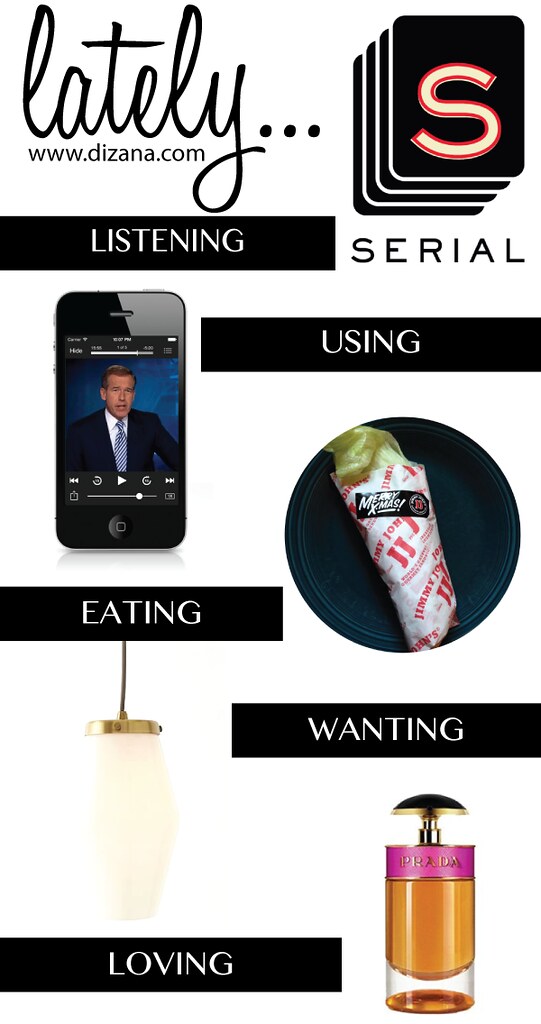 How was your weekend? It snowed most of the day yesterday. I don’t mind the snow so much when I don’t have to get out – perfect for a Sunday afternoon.

Listening to… Serial. Have you heard about this? It’s a fascinating podcast by the creators of This American Life. It follows the true story of a man who was convicted 15 years ago of killing his ex-girlfriend. There are serious questions as to whether he really did it. Each episode explores a different aspect of the case. I devoured the available episodes in less than a week.

Using… Podcruncher. Since I began regularly listening to podcasts, I’ve tried out a few different podcast apps. I hated the built in Apple one because it would frequently lose my place. I’ve been using Podcruncher for a few weeks now. It’s a little counter-intuitive but once I’ve learned it’s ins and outs, I’ve decided it’s a keeper.

Eating… Jimmy John’s Vito Unwich. I know that going gluten-free seems to be kind of a fad and I’m not sure where I fall on the whole issue. I have a thyroid condition that can possibly be exacerbated by gluten so I have been experimenting with eating less gluten. In doing so, I’ve been trying some of the gluten free alternatives at my favorite restaurants. Last week I tried out the unwich (lettuce wrap) at JJ. It was ok, but their bread is my absolute favorite; it makes the sandwich. It was also nowhere near as filling as the breaded version.

Wanting… Mid-Century Glass Pendant from West Elm. I’m always on the lookout for new lights for my kitchen. While I really would love to do a few Hick’s Pendants, it’s just not in the budget. This light showed up in my Facebook feed the other day and it was love at first sight.

. I’ve been wearing it for years; sometimes I feel like I should change things up, but I still get lots of compliments on it. Sephora recently sent me a sample of Candy; I really like it. It might make a good scent to swap out occasionally with my old standby.