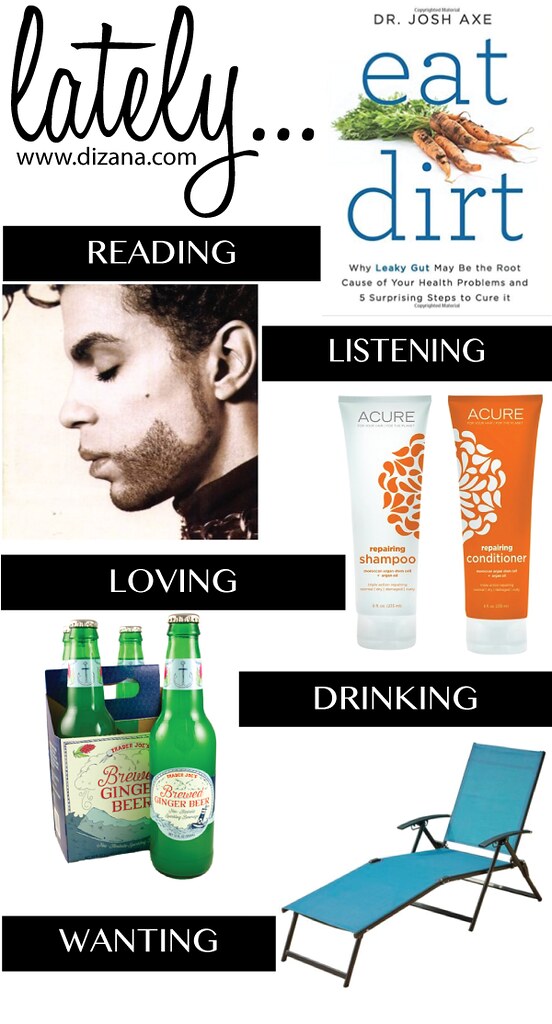 How was your weekend? Mine was really nice. I have been on a major minimizing kick (hopefully I have more to share on that later) and made some pretty good headway this weekend. I also got in some good R&R.

Listening to… Prince. I have always been a big Prince fan so I have a pretty large collection of his music on my iPhone. When I was out and about this weekend, it was my soundtrack. If Pandora had his catalog, it would have been the only music I listened to over the weekend.

Reading… Eat Dirt. I have three books going right now. This book by Dr. Josh Axe talks about leaky gut (believed to be the cause of autoimmune disease). Dr. Axe is a proponent of spending time outside playing in the dirt as well as eating locally grown (seasonal) food. I’m excited to implement some of the changes he suggests.

Loving… Acure Repairing Shampoo & Conditioner.  This stuff is a GAME. CHANGER. I have naturally curly hair and when I use this formula, I can actually fix my hair curly and make it look good. It’s the only thing I’ve ever used that helps me maintain some volume at the roots. After I finished the first bottles, I tried the Mint + Echinacea formula. It did not work as well. This is one of the few times I’ve used a beauty product that I thought, “Wow! This stuff really works.”

Drinking… Trader Joe’s Ginger Beer. I’ve been really into ginger lately. This has more sugar in it than I like to eat regularly, but it makes for a great special treat. Yum!

Wanting… Patio Chaise. I would love a couple of these for the back patio. The one that’s there now is starting to wear pretty thin. I’m worried at some point I’m going to fall through it. I would love to get some fancy expensive ones but the patio is not covered and with the Oklahoma weather, I suspect they would not last very long. If they would be sheltered, I would be all over these.