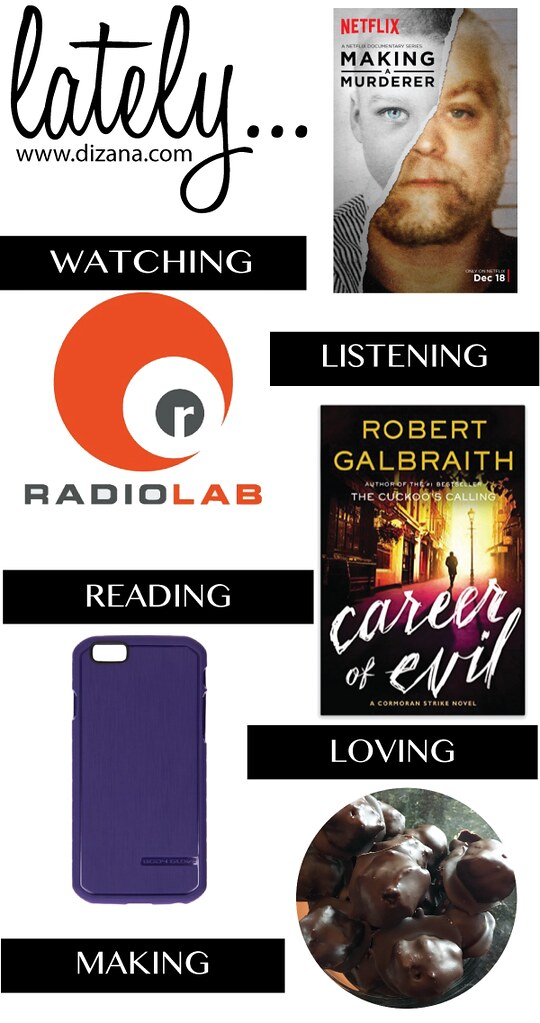 How was your weekend? Mine was good. I am ready for Christmas! I don’t remember the last time I completed shopping and had all my gifts wrapped this early. It definitely helps to make the season a lot less stressful.

Watching… Making a Murderer. I mentioned this in Friday’s links. It was released by Netflix on Friday and I dived in this weekend. It’s a disturbing, but fascinating program. It’s the kind of show that makes me want to go back to school and be criminal defense attorney.

Listening to… Things on Radiolab. I had not listened to Radiolab before but saw this particular episode mentioned online last week so I had to check it out. The episode is about our fascination with things and contemplates why some of us become so attached to things. As become a recovering thing-aholic and move more and more towards minimalism, I find this topic especially fascinating.

. The third Cormoran Strike book, has even better reviews than the other two. I just began reading it, but expect to enjoy it at least as much as the others.

Loving… Body Glove Satin iPhone Case. My iPhone met its unfortunate demise last week. I ended up upgrading to the iPhone 6S (which I love). Since it was an unexpected purchase, I bought the cheapest case they had at the store. While it could be a lot cuter, I love it for its rough texture (easier to hold onto) and form-fit. I really wish they made them in fun patterns or at least offered more colors (turquoise).

Making… coconut balls. I decided to do some experimenting to make my traditional coconut balls a little healthier. This year I used coconut cream and maple syrup in place of the sweetened condensed milk; unsweetened coconut instead of sweetened; and dates instead of powdered sugar. I also used 100% cacao with some maple syrup instead of pre-sweetened chocolate. I think they turned out pretty good. Now if I can keep myself from eating them all in one sitting…