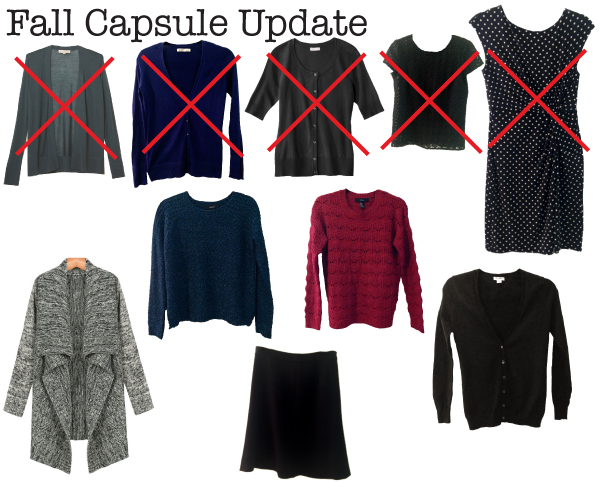 I’ve officially been living with my capsule wardrobe for three weeks – time to share my thoughts. So far, I’m loving it. It takes a lot less time to make a decision in the mornings and I think that come Spring, I’ll be much more excited about some of my Spring clothes because they will have been hidden away all Winter.

I have decided to make a few swaps. Every time I put on that teal cardigan I took it off, so I decided to get rid of it. The color is just too muted. It’s too blue to be called gray but it was too gray to wear with everything I wanted to wear it with. I’m also removing (and getting rid of) my purple-blue cardigan and polka dot dress because they have faded so much. The cardigan was from Old Navy and is probably one of the oldest pieces in my wardrobe, so I guess it got a pretty good run; but I think I’ve worn it in its faded state for far too long. The dress was from Target and also faded pretty quickly. Since I’m limiting my wardrobe, in the future, I’m going to try to buy higher quality pieces that won’t fade so fast. Now that the weather has finally cooled off, I’m going to swap out the black lace top and short sleeved black cardigan. So that’s five items out. Here are their replacements: heavy weight gray cardigan; long sleeved black cardigan; long sleeved teal sweater; long sleeved red sweater; and dressy black skirt. I think I will probably make a few more swaps but haven’t had enough cold weather to know for sure what’s going to work.

The “no shopping” part of the experiment is going pretty well. I did not realize how much “shopping” I was doing until giving it up. I wasn’t necessarily buying things constantly, but I was on constant lookout. It’s such a relief not to be in that mode all the time. I have unsubscribed from store emails and no longer check all my favorite online shops on a regular basis. I have, however, allowed myself one caveat. I’ve realized that of the five or so scarves that I own, I really only love one of them. Since accessories aren’t included in the capsule, I’ve been allowing myself to look for some replacements. I finally found one I loved on Old Navy’s website so I did order that. Since most of the pieces in my capsule are pretty muted, scarves are going to make a huge difference in helping add variety. If I can find a few that I love as much as my black floral scarf, I think I will be much happier with my capsule. I have also been thoughtfully considering the pieces I might want to purchase during my shopping window. I’m primarily considering replacements for some of the lower quality pieces I already own – a black knit dress and a black & white striped dress.